The AirServer Connect brings together all major vendor supported screen mirroring protocols into one device. It supports AirPlay, Google Cast, and Miracast. Guest connectivity is enabled by including a built-in Wi-Fi hotspot. In order to get the best connectivity for both internal and external users, it is vital to configure both the AirServer Connect and the network to work together.

Visit our support site for more information or to create support tickets for any technical issues.

The AirServer Connect has both wired and wireless networking capabilities:

AirPlay is used by macOS, iPadOS, and iOS devices. AirServer Connect provides AirPlay mirroring as well as audio-only and video playback. AirPlay relies on Bonjour mDNS discovery, as well as Bluetooth Discovery, see Network Settings on how to enable Bonjour in your network.

AirPlay mirroring streams are encoded using H.264 video compression and transmitted as TCP packets. Resolution can be up to 1080p at 60 fps and Apple recommends a bandwidth of 25 Mbps per mirroring stream. Average bitrates will be significantly lower, depending on the content.

The latency for AirPlay on AirServer is around 150 ms under good network conditions.

There are some limitations in that services offering DRM (Digital Rights Management) protected content. Certain live-streaming apps, such as but not limited to Netflix, Hulu, Apple TV+, Disney+, Amazon Prime Video, HBO Max, and most sports/TV apps, either use their custom protocol or prevent connections that are not originating from an iOS device. Some of the service providers behind these apps also prevent an Apple TV to consume content over AirPlay.

Google Cast is used by most Android devices as well as Chrome OS and when casting from the Chrome browser. AirServer provides Google Cast mirroring only. Like AirPlay Google Cast relies on Bonjour mDNS for discovery, see Network Settings on how to enable mDNS in your network.

Google Cast mirroring streams are encoded in H.264 or VP8 formats and transmitted as UDP packets. Most Android devices encode Google Cast at a resolution of 720p at 30 fps, but Chrome OS and casting from the Chrome browser as well as a few devices offer higher resolution. Maximum bitrate can be as high as 20 Mbps but average bitrates will be significantly lower.

The latency for Google Cast on AirServer is around 400 ms under good network conditions.

Google Cast mirroring is secured using TLS. The transport keys for screen mirroring over UDP/RTP are exchanged over the control connection and are encrypted via AES-128-CTR. No authentication is available for Google Cast protocol as it is designed by Google. However, the user must be on the same network as AirServer before they can project content using Google Cast and we have added a prompt to accept incoming connection attempts.

With version 2020.07.09 of the AirServer Connect firmware, we added support for casting from within apps using the Google Cast icon. This enables Chromecast-like behavior and allows you to cast from within apps such as YouTube, Facebook, Google TV, Spotify, Amazon Prime, Disney+ and many more.

There are some limitations in that services offering DRM (Digital Rights Management) protected content. The AirServer Connect supports Widevine L3 DRM protection. Certain streaming apps, such as but not limited to Netflix, Hulu, Apple TV+, HBO Max require other DRM systems and thus are not supported.

Miracast is used by Microsoft Windows devices and some Android manufacturers, notably Samsung and LG. Miracast is developed by the Wi-Fi Alliance and is based on the Wi-Fi Direct standard. Miracast uses Wi-Fi beaconing to indicate the presence of a Miracast receiver. To initiate the connection the AirServer Connect sets up a Wi-Fi SSID starting with DIRECT- that Miracast senders can discover.

If you are unsure which connection was established, you can check by enabling the home screen overlay on the AirServer Connect. That is done by pressing SPACE on a keyboard connected or by touching a touch-enabled display.

For each connection, there will be information on the connection type. The possibilities for Miracast are:

Miracast can support resolutions up to 4K 60 fps with capable sending devices and good network conditions. Average bitrates will depend on the content and resolution, but can be up to 35 Mbps for 4K video streams.

The latency for Miracast is around 180 ms with good network conditions. AirServer also implements hardware cursor on supported platforms where the mouse cursor shape and location are sent separately with very low latency.

To verify that a computer running Windows is capable of transmitting Miracast perform the following:

For full functionality of the AirServer Connect, the network connectivity must be correctly configured. This section covers what is needed for discovery and connection through the building infrastructure network as well as settings to optimize the Wi-Fi hotspot.

Discovery of the mirroring protocols that the AirServer Connect provides is done through network protocols. Discovery usually works without issues when connected to the built-in Wi-Fi hotspot, but some issues can come up when connecting through the building infrastructure network.

AirPlay and Google Cast rely on the Bonjour protocol for discovery over the network. Bonjour uses multicast DNS (mDNS) which cannot be routed across different segments of the network with standard settings on network equipment. For instructions on how to enable Bonjour across subnets, please refer to documentation from your network equipment manufacturer. An example can be found from Cisco.

It is also possible to deploy standalone mDNS gateways, for instance, using Avahi.

A list of required Bonjour services can be found together within a dedicated support article.

Network interface isolation does not allow devices on the subnet to see other devices or discover services available. This is a common setting for guest networks and must be turned off for Bonjour to work.

To verify if all required Bonjour records are correctly advertised, it is possible to use 3rd party discovery apps:

With version 2021.01.29 of the AirServer firmware, we added support for AirPlay Bluetooth Discovery. It uses the AirServer Connect's built-in Bluetooth module to advertise itself to nearby AirPlay sender devices.

This functionality removes the need for advertising AirPlay Bonjour records over the network. Also, the AirServer Connect iOS app is no longer required in most cases as all Apple devices released in recent years are compatible with AirPlay Bluetooth Discovery.

In some cases, it is not possible or feasible to provide Bonjour discovery across a large network. To help with discovery in these situations, AirServer Connect provides an option to show a network discovery QR code on-screen and apps for iOS and Android to help set up a connection. With AirPlay Bluetooth Discovery, the iOS application is no longer required in most cases as all Apple devices released in recent years are capable of discovery via Bluetooth. 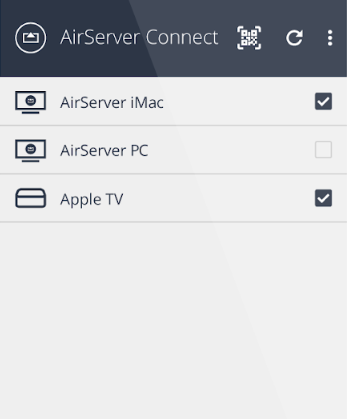 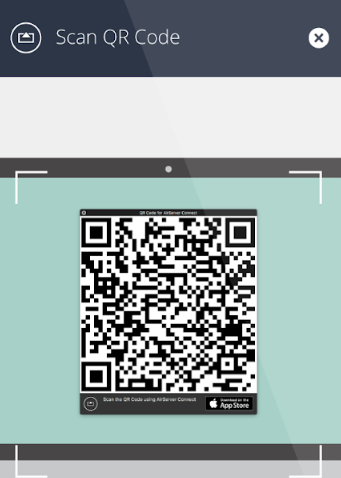 The QR code contains the hostname and IP address of the AirServer Connect device as well as the port to use for establishing a connection. The Android or iOS app then sets up a Bonjour proxy on the device using this information so that the built-in discovery tools see the AirServer Connect device as a screen mirroring receiver. Note that this requires all relevant ports to be open between the sending and receiving device, see the section on Port Openings.

For more information on how to use the AirServer Connect apps, we would like to refer to a dedicated support article.

In the case of ad-hoc/standard Miracast, the rest of the setup is done by setting up a Wi-Fi connection between the sender and receiver. In Miracast over Infrastructure, the beaconing starts the communications over the building infrastructure. The following diagram from Microsoft explains that a setup where Source is the sending device and Sink is the AirServer Connect: 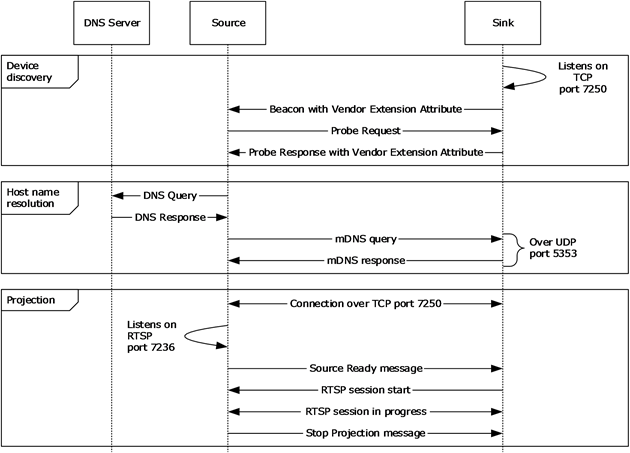 A full list of UDP and TCP ports that need to be open between the sending device and AirServer Connect can be found in a dedicated support article.

The AirServer Connect can be configured to work on networks that require a static IP address or a proxy for connectivity.

The following settings are available through both the on-screen menu or the Remote Management interface:

It's also possible to configure a user authenticated proxy server by following the instructions outlined in a dedicated support article.

802.1X settings are available from the Network menu in Remote Management. Settings can be applied but only take effect when connected to an 802.1X managed network.

The built-in Wi-Fi hotspot allows guests to connect easily to the AirServer Connect and start mirroring. The hotspot SSID and passphrase are shown along with a QR code in the bottom right of the AirServer screen overlay.

There are two possible methods for guest connectivity:

The AirServer Connect sets up a WPA2 secured hotspot with an eight-character random passphrase that is regenerated every 24 hours or when users select to End Session using the on-screen interface or Remote Management.

It is also possible to set your own passphrase, but not recommended as that can result in a lot of clients reconnecting to the hotspot when not mirroring, impacting the screen mirroring performance. To automatically regenerate passphrases, leave the passphrase field empty.

You can select which level of access guests get to the building network through the guest hotspot:

Only allows those connected to the Wi-Fi hotspot to cast their screens to AirServer Connect. It provides no access to internal networks or the internet. This is achieved with a firewall rule that blocks all IP addresses outside of the AirServer Connect.

Gives devices connected to the hotspot only access to mirror to the AirServer Connect and access the public internet. This is achieved with a firewall rule that blocks typically reserved private IPv4 addresses, these are:

Any IPv6 addresses are not routed.

Gives devices connected to the hotspot full access to the building infrastructure network that the AirServer is connected to. Network administrators can place restrictions for that network to limit access.

The Wi-Fi hotspot supports both 2.4 GHz and 5 GHz Wi-Fi channels and can be set to automatic or manual channel selection.

With automatic channel selection, a network scan is performed when starting the AirServer Connect and the best available band is selected. The highest preference is for the lower 5 GHz bands, then upper 5 GHz bands, and finally channels 1, 6, or 11 on 2.4 GHz.

If using manual channel selection, it is recommended to perform a site survey or channel scan to select the best Wi-Fi channel.

Wi-Fi channel availability depends on the country or region that the Wi-Fi access point detects using 802.11d regulatory domain beaconing from other access points. If there are multiple regulatory domains detected the hotspot will select the worldwide domain that limits 5 GHz bands. The settings menu for the hotspot will indicate which channel, bandwidth and country settings are active.

Some client devices are not able to connect to upper 5 GHz channels (149-165). These channels are by default restricted as some client devices do not support them. It is possible to enable upper channels through the on-screen or Remote Management interface.

Display your own Network

It is possible to display the connection details for the infrastructure Wi-Fi network on the home screen of the AirServer Connect.

If “Show Wi-Fi details on the home screen” is enabled, the home screen will display the network SSID and passphrase entered in this menu, but the built-in guest hotspot can still be enabled.

This connectivity diagram visualizes all possible connection paths that can exist with AirServer Connect and the different screen mirroring protocols. For the best performance and stability, ethernet connectivity is preferred where possible.

We recommend reading through our AirServer Connect hardware knowledge base. However, below you can also find a selection of common issues, fixes, and questions:

If you are not able to find the information you are looking for, we recommend creating a ticket with our support team.

Did you find it helpful? Yes No

Send feedback
Sorry we couldn't be helpful. Help us improve this article with your feedback.